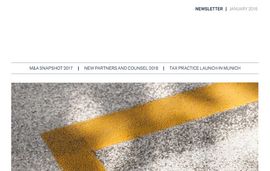 A clear reason for this increase has been an uptick in megadeals across Europe, which saw the largest number of deals worth over USD 10 bn since 2008 (12 deals). In 2017, 11 megadeals in Europe with a combined value of USD 254.2 bn, were announced.

Comprised of 3,846 deals worth USD 504.5 bn, the Eurozone has been key to the increase in European M&A values, accounting for 54.3% of the continental total. This represents the second largest total for the Eurozone since the crash. As the region’s GDP has risen and confidence in the market appeared to increase following the results of several key elections in Europe, M&A figures have mirrored this sentiment, characterised by a hike in deals between countries within the Eurozone.

Private equity buyout activity went from strength to strength last year, reaching its highest value and deal count since the financial crisis. This represents a 17% share in total European M&A value – the highest annual share of M&A since 2007. In the last 12 months, there were 1,388 buyouts targeting European assets, worth a total USD 158.4 bn, 25.9% higher than the equivalent value in 2016, with deal count also increasing (USD 125.8 bn, 1,286 deals).

Industrials & Chemicals was the most active European sector in 2017 by both value and deal count, hitting USD 147.3 bn across 1,453 deals announced. Following the takeovers of Linde (USD 45.5 bn) and Siemens’ mobility business (USD 8.7 bn), the sector hit its second highest post-crisis value, only just behind the USD 165.7 bn (1,487 deals) recorded in 2016. Germany traditionally performs strongly in the sector. In 2017, German M&A accounted for a 60% share of Europe’s dealmaking in in the sector – the highest ever percentage for the country on Mergermarket figures.