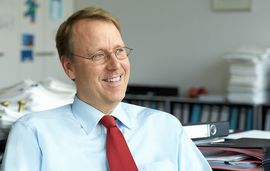 The German Federal Cartel Office (GFCO) yesterday prohibited the proposed acquisition by the State of Rhineland-Palatinate of a majority shareholding in the state’s lottery company, Lotto Rheinland-Pfalz GmbH.

This is a fundamental decision with far-reaching political consequences. Lotto Rheinland Pfalz GmbH is the only lottery company in Germany that is not in majority state control. In prohibiting the takeover, the GFCO emphasised that not even heavily regulated sectors such as commercial gambling could be free of competitive forces and there had to be unqualified application of antitrust law. Germany’s regional states reject this stance. Rhineland-Palatinate laid claim – unsuccessfully – to a competition-free zone for bringing the lottery company under state control.

Hengeler Mueller advised FABER Lotto-Service KG in these proceedings. Advice was provided by partners Thorsten Mäger (Competition, Düsseldorf) and Dirk Uwer (Regulatory, Düsseldorf). FABER has been a market leader in commercial gambling brokerage for some 25 years and was involved in these proceedings as an interested third party.

Only last year, Hengeler Mueller had advised FABER as an interested third party in GFCO proceedings on the state lottery monopoly. The GFCO had issued a prohibition order forbidding the German state lottery companies making up the German Lotto and Totoblock from engaging in anti-competitive behaviour towards commercial gambling providers in Germany – simultaneously declaring the regional market division (so-called regionality principal) to be incompatible with German and European competition law. This decision was seen then as groundbreaking in forcing an opening in the monopolised German lottery market.