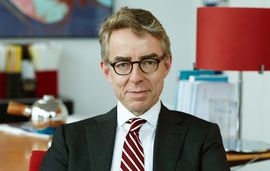 At the same time, Schaeffler Verwaltungs GmbH, a subsidiary of INA-Holding Schaeffler GmbH & Co KG, announced its intention to rearrange its external financial indebtedness in an aggregate amount of approximately EUR 3.6 bn in the context of the envisaged placement of Schaeffler AG shares. It is intended to reduce the financial indebtedness from the application of proceeds of the sale of Schaeffler AG shares and to fully refinance its remaining financial indebtedness. For this purpose, a syndicate consisting of four banks – Deutsche Bank AG, Citigroup Global Markets Limited, Bank of America Merrill Lynch International Limited as well as HSBC Trinkaus and Burkhardt AG – has committed to provide a term loan, a revolving credit facility and a bridge loan which will be taken out by the issuance of new bonds at the level of Schaeffler Holding at a later stage.