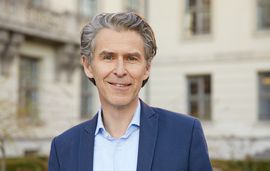 Trius Holdings S.C.A. has entered into an agreement on 27 July 2017 to sell its shares in ista Luxembourg GmbH to Lamarillo S.à.r.l. (“Purchaser”). The Purchaser is an indirect wholly-owned subsidiary of Cheung Kong Property Holdings Limited (“CKP”). In this context, CKP has entered into a joint venture formation agreement with CK Infrastructure Holdings Limited (“CKI”), pursuant to which the Purchaser will become a 65/35 joint venture of CKP and CKI, subject to obtaining approval from the respective shareholders of CKP and CKI. The purchase agreement is subject to necessary regulatory and anti-trust approvals.

ista Luxembourg GmbH, headquartered in Luxembourg, is the parent company of ista Group, a leading energy services provider. The seller’s owners are funds advised by CVC Capital Partners (“CVC”) as well as co-investors.